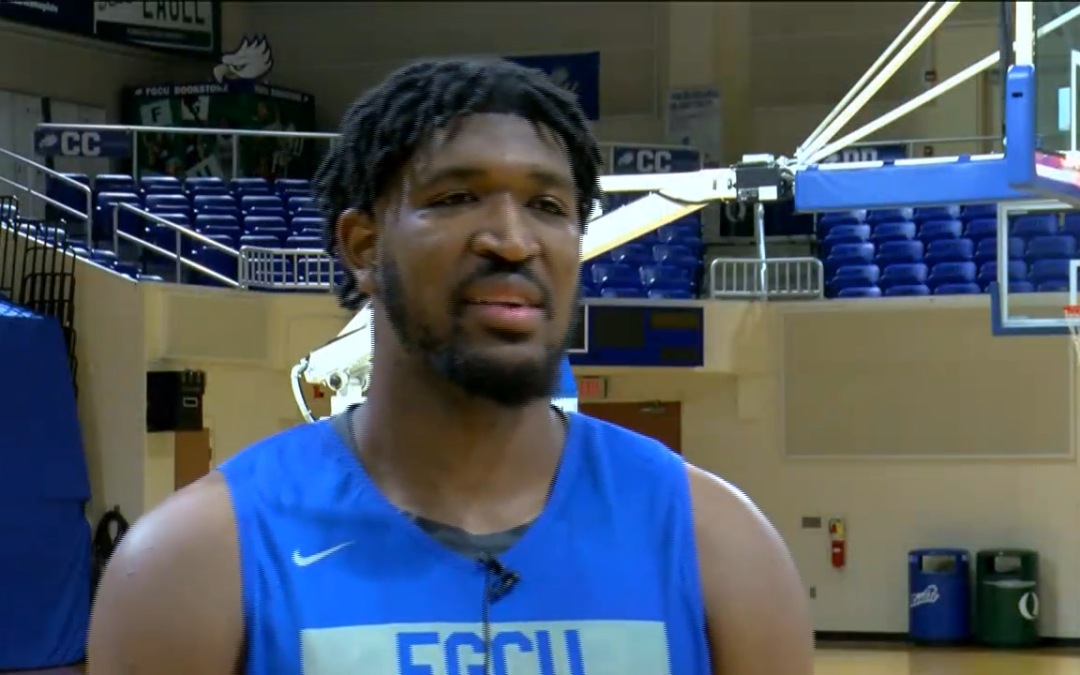 FORT MYERS, Fla. — Take one look at FGCU fifth year center Kevin Samuel and you’ll know exactly what the nearly seven-footer is capable of on the basketball court.

“We have not had a big like him in this program,” said Eagles head coach Michael Fly.

Take another look and you’ll notice something completely different about Samuel.

“He is one of the best human beings we’ve had in this program, too,” continues Fly.

But that niceness stops when Samuel takes the floor for the Eagles.

“I have the ability to get the ball at certain times just being bigger and stronger than everybody. It’s a great thing to have, to be honest,” said Samuel.

Transferring to FGCU from TCU, Samuel left the Horned Frogs after twice leading one of the nations best basketball conferences, The Big 12, in blocked shots.

“I have to remind myself, sometimes, and remind the players that we’ve got that monster down there. You need to throw it in to him,” said Fly.

Now, that monster is getting his first taste of playing in the A-Sun Conference which isn’t usually known for dominant centers such as Samuel.

And in his Conference debut on Wednesday, Samuel put the conference on notice by notching a double-double against North Florida in a win over the Ospreys.

“That’s the standard that I try to set for myself,’ Samuel said. “That’s what I told them I wanted to come here and do.”

But even getting to this point for Samuel wasn’t easy as he started off the preseason on the shelf sidelined with a nagging hamstring injury.

“I’d prefer to be on the court than on the (sideline),” Samuel joked.

But after Samuel’s dominating performances as of late, it’s safe to say that the big man is back.

“What he is doing is what we expect from him,” said Fly.

Samuel and the Eagles continue conference play on the road against Jacksonville Saturday night at 6:00pm.